I was kindly gifted an Ostomy Support Bear as I was so eager to work with and share the story of Kelly Moss, an absolutely amazing lady running an equally wonderful project. 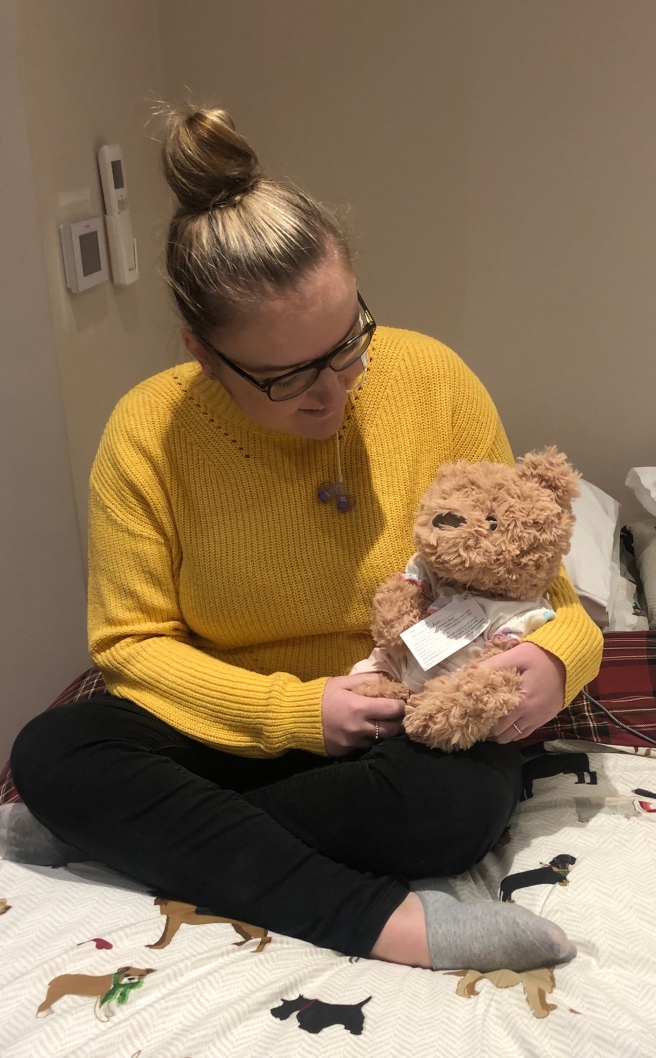 On 28th January 2019, Kelly started Ostomy Support Bears to raise awareness and reduce the stigma around having an Ostomy. An ostomy is a stoma or an opening made during a surgery such as an ileostomy, where part of the small bowel is diverted through an opening in the tummy which requires a bag to be attached over it. Kelly’s bears are made with a stoma and have a bag attached which is absolutely amazing for ostomates of all ages, to have a bear that has the same appliance as them.

I really struggled when I first had a stoma; I couldn’t face the thought of being so ‘different’. I didn’t want people to know, I didn’t want anyone to see it, but Kelly normalising stomas through her work with Ostomy Support Bears really helps patients such as myself come to terms with needing to have and living with a stoma.

I think this project is even more special as Kelly understands herself first hand what going through such a life changing surgery such as the formation of a stoma is like. Kelly has struggled with Crohn’s disease for years herself and has had an ostomy since 1998. After further bouts of severe ill health and subsequent surgeries, she started up Ostomy Support Bears as a small initiative to give her a purpose which is something that illness strips us of.

The project started just in Australia, but seven months later over 400 bears have been sent worldwide, putting smiles on faces, raising awareness, educating people and reducing the stigma that comes with having a stoma bag. It helps to prove that a bag is nothing to be ashamed of or embarrassed about.

This project is run entirely through donations on Kelly’s ‘Go Fundme’ page, the link for which can be found below.

The bears are reasonably priced, they are shipped worldwide and they make a perfect present for someone with a stoma. Kelly makes no profit from this project apart from donations which are kindly made, and that money goes back into making these wonderful bears.

If anyone is interested in these bears, please visit Kelly’s Facebook or Instagram page or if you are able to, please donate to this wonderful project which is helping patients, such as myself, come to terms with life changing operations.

View all posts by ellahollis